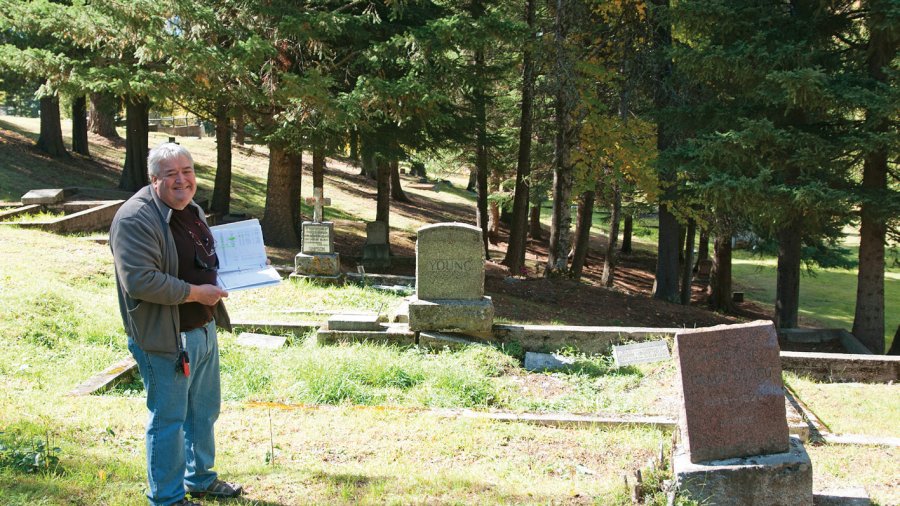 A cemetery is the surest place to find peace. Stones covered in orange and green lichen stand in silence, staggered amongst one another beneath hundred-year-old pine. Some stones are as old as the trees themselves.

St. Margaret's Cemetery in Fernie is one such cemetery. Old stones mix with old trees, standing quietly together just above town, touched only by the passing breeze.

And no one is hardly ever here—except me.

For many days this September, I walk rows of stones in the Old Section of the graveyard. I carry a bucket of warm water and soap with me and a barbecue brush.

Strange? Absolutely. It's perhaps the darkest, twistiest job I've ever had. It's also the most fascinating.

I'm a small part of a restoration project by the Fernie Heritage Cemetery Restoration Society, a group created in 2008. Reclamation was first spearheaded in the year 2000, and today the Society's aim is to clean and repair headstones, verify records, and establish an online database with photographs and GPS coordinates for the graves.

St. Margaret's Cemetery was first owned by the Crowsnest Coal Company, acquired by the City of Fernie in the 40s. By then, two world wars had passed, several flu epidemics had torn apart families, and mine disasters had shocked the valley for decades.

The cemetery in Fernie, as all cemeteries do, quickly became a place of history.

As I go from stone to stone I read dates of birth and death, prayers, pay particular attention to those who died far too young. Some scriptures engraved in languages I can't interpret, others are names I recognize—ancestors of people I know in town. Some have no marker at all.

“What's your story, sir?” I say aloud as I come upon a grave of a young man who died at 17. His stone's covered in fallen pine needles and remnant pine cones, and I brush and blow them off respectfully.

Suddenly, a squirrel chirps just ahead in the next row, flicking his bushy tail twice.

“Hello, little friend,” I say looking up, then realize I've disturbed his eating place—and also, that I'm talking to a squirrel. He scurries up a tree and squeaks at me for several minutes in anger.

I go between stones, splashing soapy water, then brushing back and forth. The sun shines, and though the air is cool for September I don't feel the chill I thought I would in the graveyard. On the contrary, I feel at peace, calmed by repetitive motion; clean, rinse, clean, rinse.

I return the next day, and the day after, walk past war veterans and family plots, all the while feeling incredibly humbled to be a part of something so important, a reconciliation of the dead.

I come across a plaque erected by the City of Fernie in thanks to Len Kosiec, one of the original founders of the Society who spent countless hours restoring gravesites at St. Margaret's. Mr. Kosiec was my 4th Grade teacher—I had no idea he was a part of such an incredible feat in his later life.

By the end, I've cleaned 170 gravestones. I drive to the store, buy four bunches of pink and white carnations, and return to place a flower on each stone I've cleaned. It feels like the right thing to do.

Later that week I meet Patrick Burke, a member of the Society, as he photographs and GPS records gravestones. He uses an egg timer. While we wait the seven minutes for the GPS to capture, we discuss the unexpected beauty of the cemetery.

“There was a man who'd lost his grandfather,” he tells me. “He couldn't find his grandfather's grave for 30 years. But we found it, we looked for it and we finally found it in the records. He was very, very happy.”

We're interrupted shortly after by a black shadow running behind us.

“Patrick! A bear!” I yell, and a beautiful, shiny-coated black bear runs up a nearby tree. He soon escapes to some safe sanctuary of his own.

While the Society has a long way to go, with thousands of pages of records and stories to still collect, there's something peaceful—even magical—about St. Margaret's. Maybe it's the untold tales, the lichen clinging to cement crosses. Perhaps even, it's a conversation with a displeased squirrel.

Either way, if peace and a little serenity is what you seek, spend a reflective moment at the cemetery.

For more information about the project, visit fernieheritagecemetery.com.