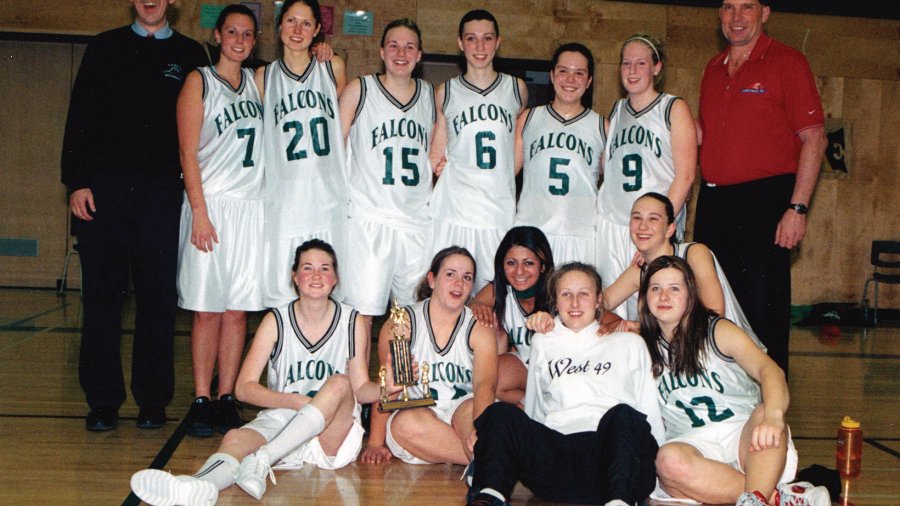 In any gym, there's a shrill squeak of sneakers against the polished wood floor, and the echoing thud of a basketball. More often than not, if you're a good shot, there's a swish of the net.

And in Fernie Secondary School's gym, in particular, there's a man who shoots the ball with precision, at least most of the time. A man who might not recognize his significance or impact, but who goes to the gym purely for the love of the game.

John and basketball might be the only reason I made it through high school. Not necessarily just because Principles of Math 12 sucked (it did), and Biology was a doozy (it was), but because first-love relationships ended in turmoil and heartbreak, and catty teenage girls oftentimes made walking the hallways unbearable (I wasn't as cool as I am now).

The moment the gym opened, and I laced up my shoes and grabbed a basketball, every adolescent worry melted away.

John would blow his whistle and we'd run across the gym for two hours. Practices were a mid-week reprieve, weekend tournaments were mini-holidays. And though we didn't always win, and we weren't always great, being a part of a team greatly shaped our character, providing stability in an incredibly unstable time of life. I'm a little nostalgic just thinking about it.

But this isn't about me, it's about John. We met at the high school gym one afternoon in March to reminisce about his time on the court—he's retiring this year after 28 years of coaching the senior girls' basketball team.

John played on outdoor courts as a kid in East Vancouver and moved to Fernie in 1980 to teach. He refereed, helped coached boys basketball, and taught math. In 1990 an opportunity arose to coach the senior girls; he took it.

Excluding the 2009 season, when John's son's team needed a coach, he's been the head coach of the senior girls. He never quit, despite challenges on and off the court. Basketball is life.

“What was the difference between coaching boys and girls?” I ask as we sit on the bench.

“The tears,” he replies.

It's true—we cried all the time. I remember losing games or making mistakes and becoming completely dislodged, us girls hiding our faces in the wide necks of our jerseys to stifle sobs. We really loved basketball. John never reprimanded us for our emotional attachment to the game, though. He just coached.

He took his senior girls team to provincials over 50 percent of the years he coached, and teams from his first years in 1990 and 1991 wound up fourth and eight in the province. But even when the teams didn't, it never mattered. For John, coaching was never about winning.

“I love coaching,” he says. “It’s been such a fun way to spend the winters. Ex-players come back and want to help. Just the atmosphere in here is enough.”

Players come home to Fernie each Christmas for an alumni game—I've played in a few myself. Sentiment floods back upon entering the gym; memories of bleachers filled with friends and family, of John and his incredible co-coaches rooting for their team from the bench, of the feeling of a swish in the net from a three-point shot far outside the key.

Try as I might to remember anything bad about playing ball, I can't. Basketball with Milldog was awesome. I still wear my FSS sweatpants all the time, for goodness sake.

John doesn't mention it as we sit on the bench—because he's a humble man—but he's received awards from the British Columbia Basketball Officials Association (BCBOA) for his lengthy contributions to refereeing and coaching. I can't think of anyone more deserving.

“I'm going to buy a new pair of basketball shoes,” I promise him as we leave the gym. “And come out to play on Thursdays in the fall.”

“You really should,” he replies.

With my new shoes, I might land a couple left-handed layups (I was so good at those). But if I don't, because I've more than likely lost my magic touch, and the only reward instead is to lace up and play alongside John, it'll be more than enough.