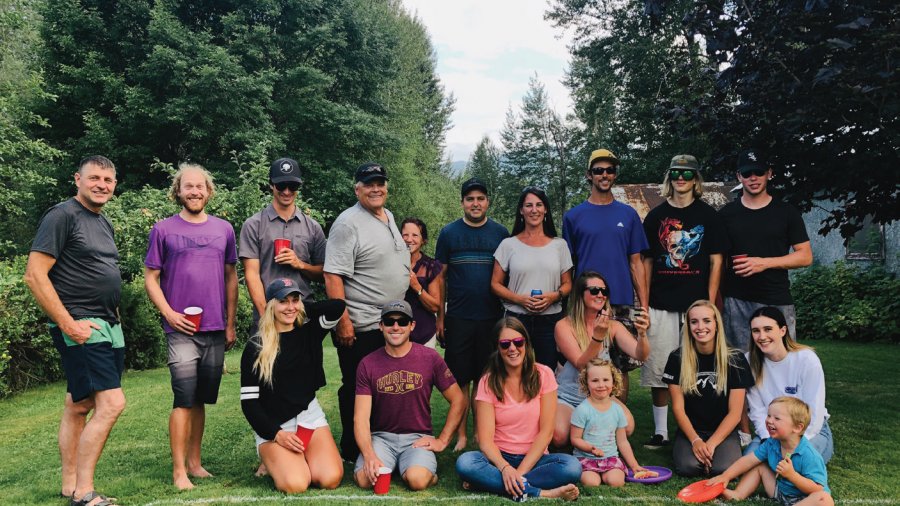 The streets are incredibly quiet at 5am I know this because for the summer I’m up before the sun rises. It’s early, but I don’t resent it because holy moly do I ever love my job.

I’m a part of the maintenance crew at the Fernie Golf Club.

I was in a funk. An I’m-almost-32-anddon’t- know-what-I’m-doing-with-mylife kind of funk. Lacking fulfillment and feeling misdirected, I decided to quit my job. I applied to school, and sought out something fun for the season. A mental health break, if you will, before my first semester.

That’s when my friend Shannon suggested I work in the maintenance department at the golf course. “Ray and Jay are the best bosses,” she told me. “That was the best job I ever had.”

Ray and Jason (Jay) Bryant—a father-son duo long an integral part of Fernie Golf Club. Ray and his wife Kim drove through Fernie in 1981, during their honeymoon. They never left. Never moved back to Ontario. Never thought twice. They raised their family here, and for nearly 35 years since Ray’s been the superintendent of the golf course. He jokes he’s a short-grass farmer, but he really is. A man who knows grass, and who’s happy to.

He started bringing Jason onto the course when he was just seven—23 years later, Jason’s the assistant superintendent. Jason hires me, and I quickly learn that being a part of the maintenance crew is more than just about mowing grass.

I see a fox with black feet and a whitetipped tail on my first day. On the third, two speckled newborn fawns. I rake sand traps, dodge golf balls, pull thistles from gardens, and learn to hand-mow the greens. One wet morning I save a dragonfly from drowning in the wet grass, and he hitches a ride in my cart until the sun dries his paper-thin wings. I hate to admit it, but I’m a little like Tony, who’s worked here for 19 years. “I always talk to the animals,” Tony says.

And just once or twice a week, for fun, I pull my cart into a secret spot and have myself a little dance—the best job ever. But it’s being a part of the maintenance crew that truly takes the cake. The lunch room is never dull, filled with witty banterand playful heckling. There’s Brad, the rough mower man who collects toonies for the weekly lottery. Rachel, who’s often mistaken for the ‘cart girl’ because of her long blonde hair, but is actually the fastest hand-mower on the greens. Rob, who grew up in Fernie and has worked with Ray since before Jason was born. Rob, who’s never floated the Elk River— until today.

We finish work a little early mid-August, and gather our floaties at the maintenance shop before making our way to the river. The plan’s to float the river to Ray’s house in West Fernie, then play games and eat spaghetti.

We gather in a circle on the sand, drinks in hand. “Thunderstruck” by ACDC booms from Kevin’s portable speaker, and every time the word thunder appears in the song one person starts chugging their drink until the next thunder clamours. After the five-minute song is over, we literally fall into our tubes and begin the float.

The sun’s warm, the water frigid, and I’m yelling because I’m having the best time ever. Drunk and happy, with coworkers who feel more like friends, we float casually like the grass-mowing posse that we are until we reach Ray’s backyard. We play badminton and beersbee. Ray sits on a bench outside the kitchen door in the afternoon light and talks to Jason when, despite my gin-infused haze, I realise they’re the same in so many ways. Working outside on the golf course is already such a wonderful place to be, but to work with your dad in just such a place must be the most wonderful thing there is.

Soon we gather along an extra-long table to eat dinner. I think about the best way to end a summer before going back to school at the ripe old age of 32. It’s here in Ray and Kim’s backyard, in the company of people who appreciate a straight-cut line on the green.

Being a part of the golf course maintenance crew is like going to the Olive Garden— when you’re here, you’re family. Except Ray’s spaghetti and meatballs is better than anything you’ll ever find at the Olive Garden.