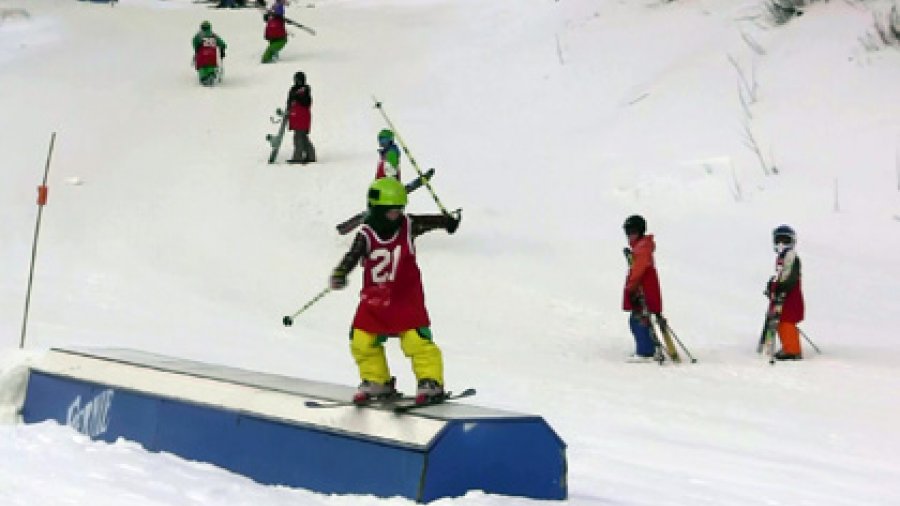 It’s only fitting, with the forthcoming opening of the ski hill that December’s focus is a snow-related sport. After all, it’s what most people come to Fernie for. Then just a few days into your first epic season, you are nothing short of smitten. And inevitably, thus starts the task of figuring out how to stay for season number two.

A lot of individuals, who are passionate about all things snow, invariably enjoy a stint working at the ski hill, as a guaranteed way to spend maximum amount of time in a fun snow haven environment. And over the past few years, there is an increasing number of coaching staff covering a variety of different styles of skiing. Any given weekend you can encounter anything from four-year-old ski racers putting you to shame, to adult improver sessions enjoying lunch as much as the skiing itself, from big mountain skiers doing things you didn’t previously deem possible to an increasing number of Freestyle skiers of all ages and bright colours.

I chatted to some pivotal members of the Fernie Freestyle Ski Club (FFSC), which is now in its ninth season. From humble beginnings, the Club has grown to be the second largest club in the Alberta Freestyle Ski Association. Whilst the increasing numbers and success has grown, so has the athletes’ interest in competition; however, the club has always emphasized fun and a love for skiing as its mandate.

Coaches Mike Richards and Bill Warrick, a long-time Fernie resident, laid the foundation for the club as it stands today. Through the years, the club has benefited from tremendous coaching strength and since 2011 has been led by Chris Ebbern as Head Coach, Bruno Frost as Assistant, with another eight to nine coaches each year depending on the membership.

Such a strong coaching staff has certainly brought about results. Of the club members from the inaugural seasons, many are still involved in traditional and new school competitions at an international level and several have been involved in coaching. Regardless of their journey, all alumni have developed a deep love for skiing and are proud to call Fernie their skiing home.

The club, like many others based out of Fernie, has always attracted most of its athletes from Alberta, in particular Calgary. But as the club has developed and grown, there has been an ever-increasing interest from skiers from Fernie and the surrounding area. With so many different programs you might think it hard to decide what to participate in, but also, how so many organizations can cohesively all operate at one ski hill. The FFSC has always had a co-operative relationship with FAR management, being very supportive of providing on-hill space for the mogul course. And developments are in the works with an expansion of the freestyle facilities, as well as looking to host a range of competitions.

In terms of the operating of the club, it lets the athletes and parents choose their participation level, while athletes can choose to get involved in competitions or just on-hill training. The club offers – new to this year – no-school Friday coaching as well as a range of off-snow programming, from water jumps to trampoline training – with FFSC in the process of trying to raise the money to buy its own trampoline.

It seems such efforts do not go unrewarded, with FFSC skiers placing top ten in Alberta Provincial big air and moguls competition, five athletes in the top ten in the Alberta Winter Games and five in the top ten at the Alberta Championships. Club members attended junior Big Mountain events too, many placing top three. This year the coaches are hoping to provide a more streamlined training approach for those athletes who are interested in competitions while still providing all club members with a full spectrum of skiing skills.

If interested in learning more, visit www.ferniefreestyle.ca where you can see programming and fee options, coach information and club mandate. You can also get in touch with Leanne Callier-Smith, who is organizing Fernie trampoline fundraising, at ferniefreestyle@gmail.com.

Regardless of what’s in store for you, whether it’s your first visit to Fernie, first time on skis, or a FFSC whiz kid gearing up for the podium, here’s to an awesome season ahead.