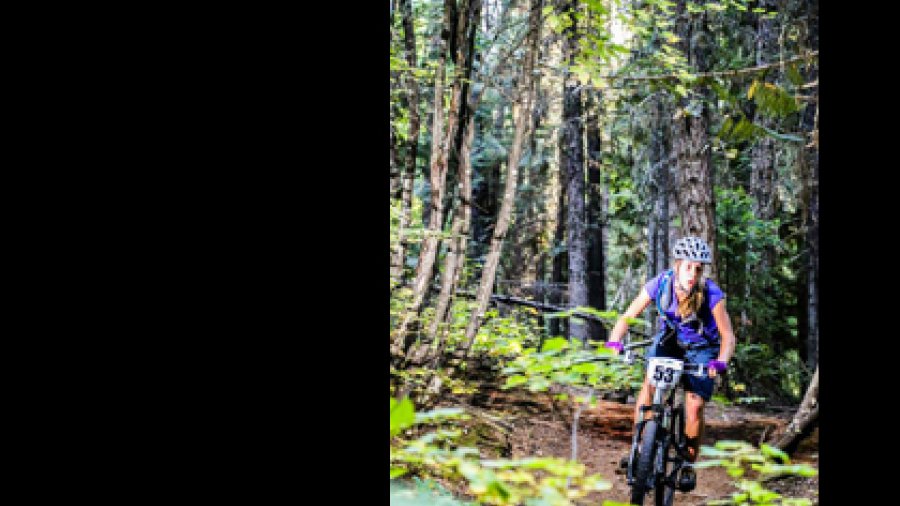 You only have to walk the length of 2nd Ave to see every second window advertising one race or another. The race scene is everywhere and there is an abundance to choose from, whether you’re a 65yr old taking up a new sport, a 30yr old downhill bike fiend, or a 4yr old child who can’t as yet tie your own running shoes. In short there really is something for everyone.

Last month, saw the official start of fall. It took a while to take hold, with soaring temperatures and clear days. Which is good news if you’re to be running about in a wet swimsuit. The race in question? The Fernie Kid’s Tri of course! A fast sold-out Triathlon, catering to 4-15yr olds, now in its third year, took place on Sunday September 8. As Co-Race Director, Scott Dressler says, “It was a great event. We had a great response from volunteers and sponsors once again. With a lot of happy kids crossing the finish line, and a lot of big smiles from everyone in attendance!” The weather was indeed kind, “making it the perfect community event to bring everyone together after the summer.” In fact you only have to see the look of determination on the kid’s faces to tell they will pretty soon be out racing Dad.

Or, of course, setting their sites on our next race. A week earlier, the inaugural Fernie BC Cup took place at Fernie Alpine Resort (FAR). As the third and most challenging of three races on the BC Cup circuit, “the race was a huge success with all of the riders praising the awesome new course, which was incredibly difficult, and fun at the same time,” says Dylan Siggers, who was won the 19-29 Citizen Male category. With Lucie Richer taking first in the Citizen Women overall. Which in short means they are lightening fast, and just a hair slower than the Elite.

Whilst away from the ski hill, the Fernie Mountain Bike Club (FMBC) had a busy end to the season too. The annual Project 9 race took place on Monday September 9. A race which gains popularity year on year, as individuals test their times ascending, descending, or both on one of Fernie’s most popular trails. Familiar Fernie names were littered throughout the results, with Luke Stevens taking Men Overall and Leslie Prentice Women. Bob Maudie showed his climbing skills, being the fastest up and second fastest overall. With Strahan taking the fastest down.

Whilst earlier in the season, every Tuesday night throughout July and August, the FMBC hosted the Toonie Race Series. “Eight races in total, across a mix of Downhill, Enduro and XC races, with anywhere between 12 and 35 riders. Overall winners were Luke Nelson and Leslie Prentice for men and women respectively. For a $2 entry fee, competitors got a beer, nachos, and a chance at great prizes from the sponsors.” Bob Maudie assures me it’s got a “casual non competitive atmosphere.” But having seen those 4yr old Tri kids dominate their bikes, I’m not so sure.

Lastly, was the Fernie Tears & Gears Mountain Duathlon. Now in its fourth year, it brings Fernie folks out of the woodwork, where many self-proclaimed “non-runners” or “slow bikers” show they can actually do both better than most. Ryan Hamilton out of Cranbrook snuck past the locals to take the Classic Men’s Solo title. Whilst Leslie Prentice spent a lot of time on the podium, taking fastest Classic Women’s Solo title, as well as fastest run and bike speed traps and fastest overall run and bike times! The Classic Men’s Team was runner Forest Latimer and biker Ed Shipowick, as they fought off the strong T&G veteran competitors of Simon Piney and Johnny Shaw. Women’s Classic Team was Cheryl Paulson and Becky Swanson, with a special mention going to 3rd placed team 14yr old Hannah and Micah Morris. The Mixed Classic Team winners were couple Aina Buchwald and Matt Baron.

And if you’re worn out just reading about Fernie’s finest, then imagine toeing the line with them. Congrats to all competitors, you make Fernie proud, and just think with another change in season just around the corner, it’s time to rest up before a whole new collection of activities is up for grabs!

If you or someone you know has an event or race coming up, in or out of town, please send us the details and results to info@clarismedia.com.