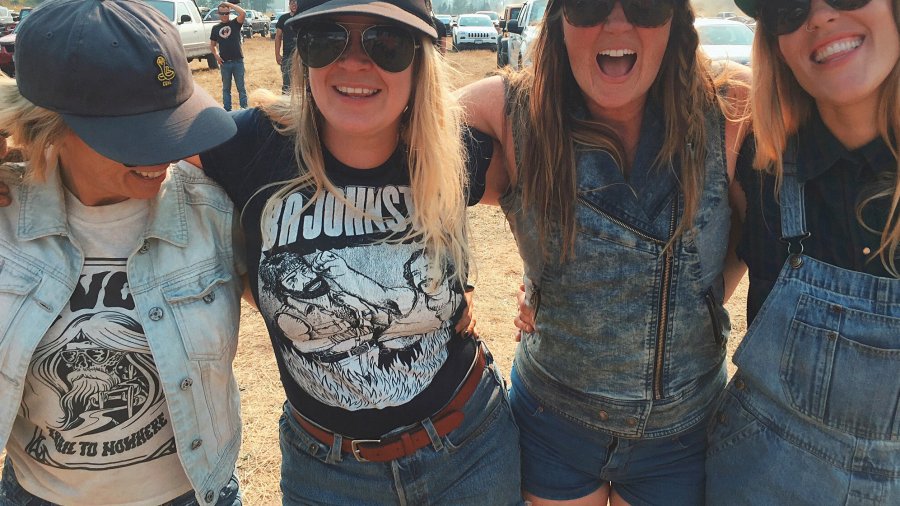 Denim vests and cutoff denim shorts, trucker hats and chewing tobacco. Small cars, big trucks, mud and dust all over your face, your hands, your feet, your clothes (if you happen to be wearing any). This, all of this, is Derby.

Derby Day in Fernie is by all rites a national holiday, an elaborate and wild celebration at the end of the summer, a Labour Day Sunday always worth attending. Everyone—despite their geographical background or personal preference for exploits—comes together.

Families fill bleachers and others pack into beer gardens. People spend weeks and months fixing up old cars to drive them into the stadium to be destroyed. A hot dog becomes our best friend, a glass of water our enemy.

And when the cars and trucks smash, we yell. We yell so loud we almost drown out the revving engines and our voices become hoarse. We choke on the dust, and raise overflowing beer-filled cups.

When I was a kid I'd stand on the second rung on the gates at gymkhana and watch rust buckets collide. I like to think I always appreciated the excitement of it all, but it wasn't until I moved home that I finally understood.

If you haven't been to Derby, you're missing out on Fernie. Real Fernie. Nitty, gritty, get-filthy Fernie. And it's all for a good cause.

The annual Lions Club fundraiser has been running Derby Day for 40 long years, and each year seems better than the last. The smash, bash, crash-athon began in Hosmer in the 1970s, but coal dust pushed the event here, and in 2012 it moved to an open field with the Lizard Range as background, gophers chirping in the grass nearby.

To date, the event has raised nearly half-a-million dollars for local charities, families, youth sports and other community causes.

I can't think of a better reason to go.

Rick Mitchell remembers when Derby started—he was just ten years old. Nearly every year since he's been involved, fixing up old trucks and cars, entering the stadium prepared to hit the gas, the number 66 painted on the car's side. His kids became a part of the event, and now his grandkids too; a Derby tradition for three generations.

“It's the thrill when you're out there,” he says. “It's just awesome, you don't know where the hit's coming from, but you're goin' to get hit.”

Rick's won several derbies, both for best dressed and the main event, but it's not only winning he considers to be the best part about it. It's the crowd, the reactions, the beer-filled cheers and crash-induced screams, it's the reaction to a rollover.

“I've never rolled over, but I'm still trying,” says Rick. “I always paint something on the bottom of the car; get a rollover and the crowd goes nuts. Anything you can do to please the crowds, that's what we're there for. We're there to entertain.”

Entertain indeed. Since its inception more than 1000 cars wound up punished and mulched, and thousands of people have found themselves fully immersed in the chaos. I haven't missed a Derby since moving home seven years ago. First it was Derby brunches with unfamiliar friends—now it's Derby Day with my best friends. Denim clad head-to-toe, there's a sense of nostalgia with each flick of mud and crunch of bumper.

Derby and river swims, the greatest sense of community, a little car-crashing education.

Admittedly, I look over the fence that separates the beer gardens from the competitors with envy. Clad in full coveralls, the people who put time and money into a few short minutes of thrill and adrenaline are some pretty incredible people. I've contemplated the Powder Puff event, but I'm just not badass enough.

Each year I raise a glass to them. Okay, okay. Several glasses, some hotdogs, vulgar yelling and terrible dance moves.

“It's one of the greatest fundraisers in the valley,” says Rick. I couldn't agree more.

This Labour Day Sunday, you know where I'll be—at Derby.