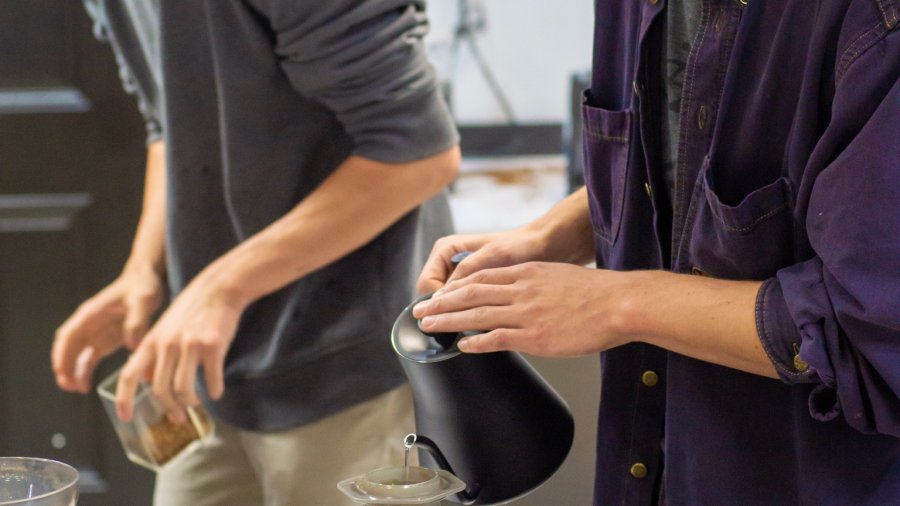 This September 7, Keegan Street of Rooftop Coffee Roasters, a specialty small-batch coffee roasting company located in Fernie, BC, entered the BC Regional Aeropress Championships in Vancouver. His only goal - not to embarrass himself. The field was competitive, with some big names in the industry. The result - he won and is now heading to Toronto (all expenses paid) to compete at the Nationals.

We wanted to learn more about the competition so we got in touch with Keegan with a few questions!

FF. How many competitors were involved?
KS. 27 competitors entered, a mix of home brewers, baristas, and roasters.

FF. What did the competition entail?
KS. Aeropress competitions were created to offer a counterpart to the stressful, highly-competitive barista competitions. Where barista competitions involve complex score sheets, judges scrutinizing every move, and competitors bringing in their own coffees, Aeropress competitions have none of that. Everyone is competing with the same coffee, so it doesn't come down to who brings the fanciest beans. The judges have no scoresheets. The competitors are only judged on the coffee's flavour, and everyone is brewing with the same device, the Aeropress. This really equalizes the field, and makes it a test of who can create the best brewing recipe using the same coffee.

The format of the competition is set up like a tournament bracket. The initial 27 entrants were split into groups of three. These three brewers prepare their coffee at the same time and deliver it to the judges in identical cups with their names written on the bottom. Three judges taste each of the coffees and have to decide which cup they'd rather finish. The judges then simultaneously point to their favourite cup, and whoever wins proceeds to the next round. The people who advance are then put in groups of three, and this repeats until there is one final heat left. This competition had three rounds total, so I had to win three times to win the whole thing.

FF. What was the most surprising part of the process?
KS. I was most surprised by how simple recipes can produce amazing coffee. At the competition, I learned that some other competitors had been mixing minerals to make their own water recipe, had been using high-tech equipment to calculate extraction yield, or were using high-end professional coffee grinders. My recipe, on the other hand, was very simple and didn't require any equipment beyond a kettle, entry-level home grinder, Aeropress, a mug and a couple spoons. I was initially nervous about how basic my brewing recipe was in comparison to others, but that didn't matter at all in the end. I had to rely heavily on my palate as a result, constantly tasting the coffee, but it proves that the most advanced equipment and complex technique aren't always necessary. It goes to show that any one can brew amazing coffee at home, without breaking the bank.

FF. When are Nationals and what are you doing to prepare?
KS. Nationals are September 27 in Toronto. For this one, I won't receive the coffee until the day of the competition, so I can't fully finalize my recipe until then. However, in the lead up, I'll do some tests with other coffees to see how things like water temperature, grind size, water to coffee ratios, and brewing time affect flavour. Learning how to manipulate those variables will be very useful on competition day.

Congratulations, Keegan and the best of luck!

Look for Rooftop Coffee Roasters Cafe and Tasting room, opening this winter in downtown Fernie at 492 2nd Ave. “Where it all began!”

Posted: Jul 01, 2020 The Trust Continues To Adapt To Serve The Region

Posted: May 29, 2020 The Saturday Quarantine Social

Posted: May 28, 2020 Free Robot Week for Students and Families Interested in Robotics