Celebrate Women Entrepreneurs in Your Community with #WEcreateBC 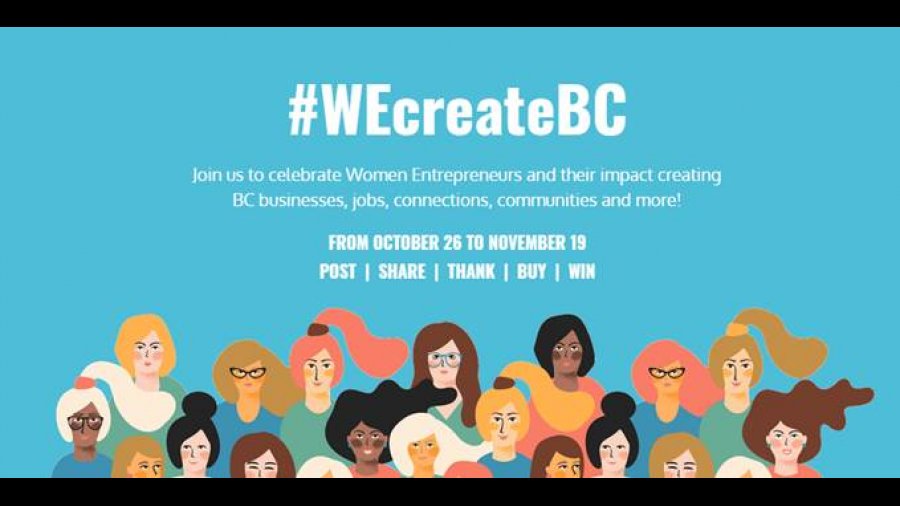 The inaugural #WEcreateBC campaign launched this week to celebrate the impact that women entrepreneurs have in creating businesses, jobs, connections, and communities in British Columbia.

The campaign is a joint effort between Women’s Enterprise Centre (WEC) and Forum for Women Entrepreneurs (FEW) and will culminate in a virtual toast on Women’s Entrepreneurship Day on Thursday, November 19.

“Women entrepreneurs play a key role in the economic success and recovery of our province, and they also contribute to our communities in a number of ways,” says Jill Earthy, CEO of Women’s Enterprise Centre. “This campaign highlights the ripple effect of investing in women-owned businesses. Now, more than ever, it is important to support our local business owners as they build resiliency. Through the #WEcreateBC campaign we are harnessing the power of social media as a way to share and celebrate the stories of the inspirational women business owners, mentors and leaders who are making a positive impact in the lives of British Columbians.”

According to recent research conducted by the BC Chamber of Commerce and FWE, nearly 70% of women entrepreneurs integrate social impact into their business and 63% focus on sustainability.

Women’s Enterprise Centre is a non-profit organization that provides business loans, advisory services, training, mentoring, resources and support to women entrepreneurs throughout BC. Forum for Women Entrepreneurs is a BC-based Canadian charity that energizes, educates, mentors and connects women entrepreneurs to be wildly successful, promoting strengthened economies and thriving communities.

“There is a lot of synergy between the work that all of our organizations do to support women entrepreneurs in their journey to business success,” says Paulina Cameron, CEO of Forum for Women Entrepreneurs. “We know that women entrepreneurs are going to multiple organizations for support in different areas of their business, and we want to highlight why that culture of collaboration is critical. British Columbia stands to gain $21.2B in incremental GDP by 2026 by closing the gender gap. Increasing and supporting the rate of women’s entrepreneurship is a key component of improving women’s economic and community impact.”

Individuals are encouraged to get involved in the campaign by posting stories of women entrepreneurs in their city using the hashtag #WEcreateBC for the chance to win prizes from women-owned business.

“We’re excited to see our collective voices come together to showcase the work of women entrepreneurs and hear from so many diverse voices,” says Jill Earthy. “We hope it will bring some positivity to communities all over BC.”

More information on the campaign can be found at wecreatebc.ca.