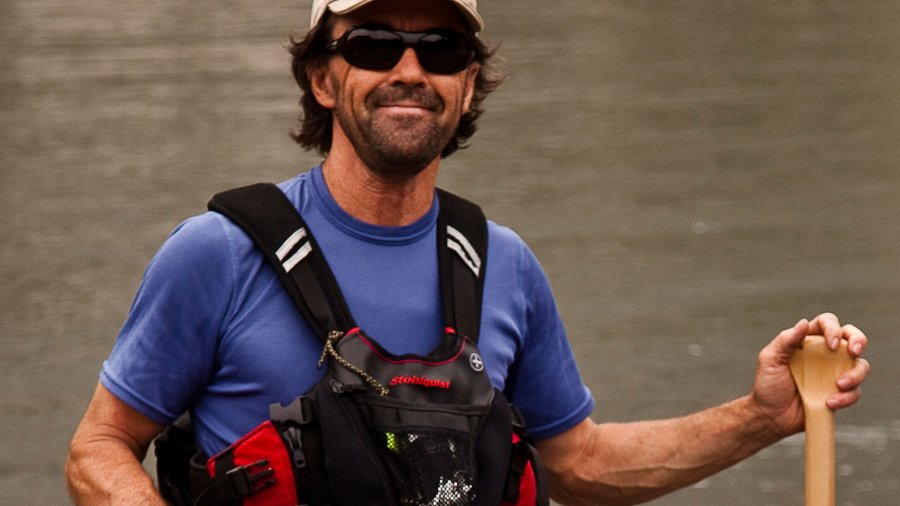 When I moved back to Fernie, I was hired to teach Entrepreneurship at the College of the Rockies as part of the Mountain Adventure Skills Training (MAST) program. It was the first I had heard of MAST, but over the next five years I discovered and appreciated the diversity and adventure of this program, its students and the master mind behind it, Brian Bell who has been sharing his passions through MAST as an instructor or program coordinator the last 25 years.

Brian is originally from Ontario. “I learned to ski at a tiny hill called Sky High, with two t-bars and two rope tows,” he tells me. I think, sounds familiar as it reminds me of the 80’s in Fernie but I quickly learn the difference between these ‘mountains.’ “It was so fast and so short we could do 100 runs every night!”

After graduating from high school, Brian attended Lakehead University in Thunder Bay admitting he had no specific career in mind. “I went there because they had three ski hills and the outdoor program sounded fun.” What is interesting is Brian didn’t grow up in and outdoorsy family. “We did some camping when I was little, but not adventurous stuff. My parents were golfers! I was exposed to so much in that first year that I would have never been exposed to otherwise… things I’ve been doing ever since. Rock climbing, paddling… I was introduced to all of it.”

After completing the program, Brian began teaching and guiding white water canoeing in Ontario, where he met his future wife, Andrea and had the opportunity to travel. “I did expedition guiding in the Arctic, sea kayak guiding in Belize with Andrea for a number of years… we visited places we may have not spent time in otherwise. I feel super lucky that way. I spent a year of my life on the Nahanni River!” Yes, I had to look that up.

In 1993, the couple were interested in spending a winter in a mountain town. They learned about Fernie from a friend who knew Blair Craig, a fellow paddler who said they had to go check it out. So they did.

“We were living out of a camper van,” Brian tells me. “It was $10 a night to plug in at the hill and have access to the shower. We would run all over the ski hill to find Heiko and pay him!” Working for Heiko was Brian’s first job. “He hired me as a lifty, and made me cut my long hair.”

When Brian heard that the College was developing an outdoor program, he applied to develop and run the white water program and was hired. “I also taught skiing and rock climbing through the program.” It was 1995, and they recognized Fernie was where they wanted to be so they decided to get into the house market. “It was the smartest thing we ever did,” he shares, adding that the mortgage broker worked her magic to make two ski and paddler bums look good on paper. “We just dove into Fernie life, and things kind of lined up. It seemed right.”

Brian off-set teaching with guiding at Fernie Wilderness Adventures. When the MAST coordinator was moving on in ’97, Brian was awarded the position. “For a full-time gig in Fernie, it’s pretty awesome.” We agreed that when you find a good job here that allows you to continue to pursue your passions, you don’t let it go.

Since its inception, it’s fair to say MAST has had a significant impact on Fernie. The number of MAST graduates who have started their own business or work with outdoor operators such as FAR, Island Lake, Fernie Wilderness, Mountain High, Canyon Raft is substantial. Many are now raising their kids here! “I’ve been doing it long enough that I’ve been able to see the whole progression,” Brian says with a smile. I know he’s proud.

While the bones of the program haven’t changed, Brian says they are always keeping up with industry standards and adapting to the times. This year specifically, like most schools they have had to shift but it’s been a positive as it has allowed for innovation such as new speakers available to lecture from anywhere in the world. Brian shares that what also makes the program so strong is the local legends who instruct with MAST. “We are really lucky that people like Lee-Anne Walker live here and can pass on that information and passion to the students.” Lee-Anne has been teaching Natural History with MAST for 25 years.

MAST was also the conduit for the Fernie Mountain Film Festival (FMFF). “It was an idea that Jon Turk and I hatched 15 years ago, and we were able to do it through this program.” This festival was the first film fest in Fernie and quickly became a staple. Regrettably, this year it will take a hiatus as the committee believes it’s all about bringing people together to celebrate mountain culture as a town.

“It’s unfortunate, we had some fun films to share,” he says, but next year will just be that much more wonderful.

Outside of MAST and the FMFF, it’s not surprising Brian is a behind the scenes trail builder and maintainer. His passion and dedication for the outdoors and mountain culture is evident through all he pursues, admittedly beginning with the discovery of skiing, ‘it was the gateway,’ he says. And while this continues to be a significant part of his life, Brian has increasingly become intrigued by artistic pursuits.
“I secretly idolize artists in town like Laura Nelson and Mel Macvoy, and want to try to be more artistic somehow. I’m not sure how or what that looks like, it’s not something I have had the time to explore but I’m going to stay open and see what happens.”

While our passions and interests may ebb and flow, Brian feels it’s essential to always carve time out for “the other stuff.”

“Because it’s what’s more important. Sure, you have to make time for work but really the other stuff is what matters. We are so fortunate here that you can make being outside a priority. It’s right there for you. For mental health, community health, it’s one of those things that brings us together.”

Thank you, Brian. For sharing your story and your enthusiasm for the outdoors, and your dedication to our community.

1. When did you first arrive in the Valley and what brought you here?
On the advise of my tree planter buddy, looking for a good ski town with good paddling we came in 93/94 to spend a winter!

2. Who did you first meet?
Heiko was one of the first!

3. Do you remember your first general impression of Fernie?
I felt it was small and authentic and filled with a cool mix of loggers and miners and these outdoor fanatics. And there was a tonne of snow. We were still telemarking back then.

4. What keeps you here?
The community and that I’ve been lucky to raise my family here. We’ve put down roots and I can’t really think about living anywhere else. We don’t want anything more, we’ve got everything we need. Access to outdoors, right out the backyard every day! I don’t know if I could get that anywhere else.

5. Do you have a favourite Fernie pastime?
It’s all seasonal! I have seasonal favourites, but I could never pick one. Biking, climbing, skiing and paddling. I’ve always been a generalist, not focused on one thing and enjoy being able to do everything.

6. What time of the year do you love most in Fernie, and why?
The fall for sure. Just running and biking on those golden Larch needle covered trails on a cool day… it’s so magical. I grew up as a cross country runner, and it was always in the fall. There’s something just normal about it.

7. Where do you see or hope to see Fernie in five years?
I think the last few years we have experienced a massive boom in tourism and visitors, I hope to see Fernie be able to build up its infrastructure to handle the tourists well. I don’t see it going in any other crazy directions, I just think we need to keep what we’ve got and protect it, and enable tourism to grow as it seems to be non-stop growth.

8. How do you start your day or what is one of your daily rituals?
The strong Americano is the daily ritual, that’s for sure. And a dog walk, pretty typical.

9. Tell us something people might be surprised to learn about you.
I would love to learn to be more artistic.

10. Quote to live by: Either use it or you lose it, or take a walk in the forest everyday. More and more the decompression time in the forest is a code I actually live by.