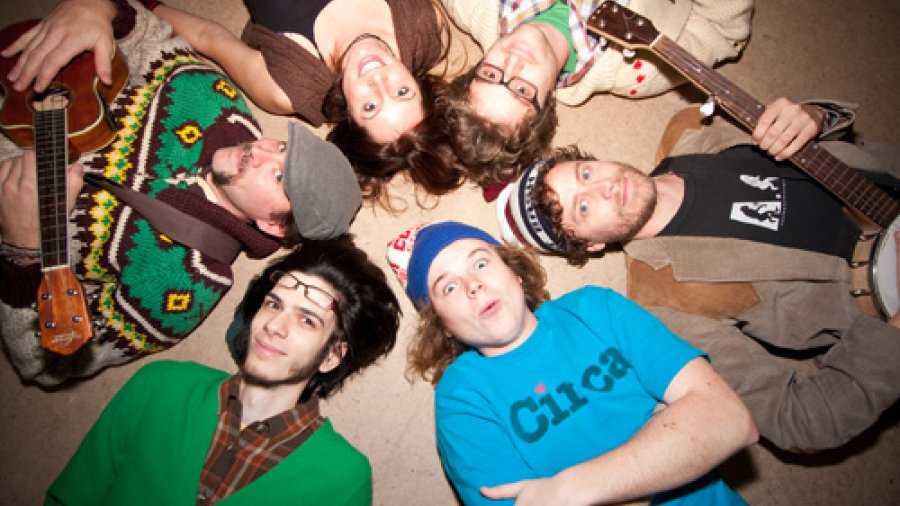 Every band remembers their first gig. Most bands park their van in a dingy back alley, unload their instruments through the back door of a local bar, do a sound check, and nervously get through a well rehearsed set for very little money. For our first gig, we unloaded our instruments onto a chairlift and played 6,316 feet above sea level. It was at the top of Fernie Alpine Resort on the outside deck of the Lost Boys Café playing for skiers on their lunch break. There was no sound guy, a blizzard blew in halfway through our set, we played for free sandwiches, and we were stoked. I remember a friend telling me that he could hear my banjo all the way out in Cedar bowl that day. If someone told us then that less than a year later we would be playing on a giant stage at the 2010 Winter Olympics in Vancouver, we probably would have laughed….or fainted.

Shred Kelly started last season at Jam Night at the Underground below the Brickhouse, which at the time was every Tuesday, before we moved it upstairs to Thursday. I hosted the night and my housemates Steve, who plays guitar, and Ian who plays drums, helped out by performing with me on stage. I had just bought a banjo and was terrible at it, but dedicated to learn. After a season of jamming with these guys and showcasing some original songs at jam night, we decided to take the band much more seriously and in the summer Sage joined on the keyboard and vocals, Jordan on bass, and more recently Mike on lead guitar. 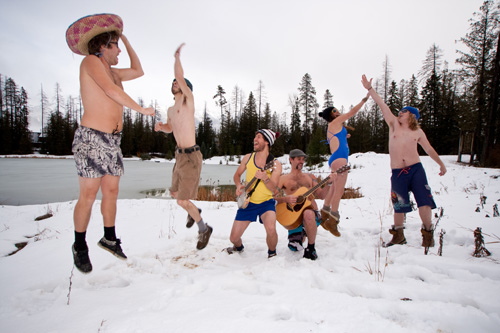 The banjo has been a key influence on shaping our sound. Early on, I became very interested in learning a certain style of playing the banjo called clawhammer, which is a traditional old-time method. It consists of making a claw-like shape with your hand and striking downward on the strings with your fingernail and thumb in a strum pattern called the “bum-ditty”. Ever since learning the clawhammer technique, the style of music that we play as a band came to be a mixture of old-time folk music with an up-tempo punk inspired feel. We’ve often laughed about what you’d define this music as….Indy-folk? Newgrass? Banjo-Punk? (Bunk?!) Whatever it’s called, it’s getting people dancing. And that is what has inspired us to continue.

Fernie has been an amazing place to start this band and showcase our material. There is so much musical talent in this town and we’ve had the great pleasure to perform with other great local acts such as the Arcade Files, The Runs, Big Bubba Tres, and Ben Hur. We owe a lot to the promoters of the bars and venues in town who allowed us to play our first gigs and continue to help us make a name for ourselves. Our audience is usually receptive to our music and we love to get a good dance floor moving. Some of the more memorable shows for us have been Halloween at the Central when we dressed as Michael Jackson and his zombies, various rowdy nights playing to a post-bingo crowd at Bulldogs, and New Years Eve at the Royal involving one broken ukulele and one giant split lip requiring stitches.

Most of our songs are inspired by everyday Fernie life. You will hear us play a fast paced ukulele song called “I Hate Work” which is about all of the terrible jobs that we’ve had while living the ski town dream, something most of us can relate to, or “Ghost Inside My Head” about all of the worrisome things that keep us up at night. Currently we are working on our first studio album titled “Goodbye July” which is named after the fast paced opening track on the album about loving the winter in all its glory. We are ski bums and we love it.

All in all, Shred Kelly is about good friends and good times and loving the lives that we lead. Our journey as a band has just begun and who knows what the future will bring. What I do know is that I can’t think of anything I would rather be doing with my time right now than rocking out with my best friends and getting a crowd foot stomping through the night.