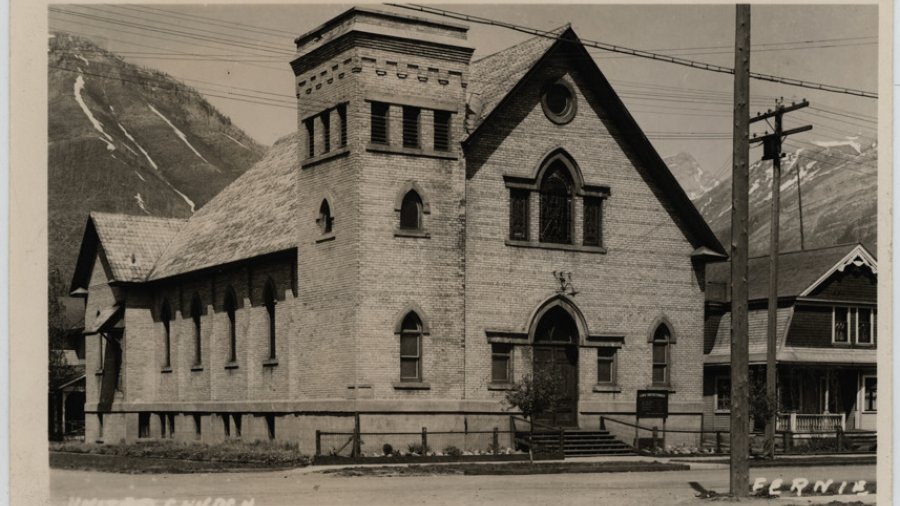 As introduced in the June edition, the Built Heritage Grants, funded by Columbia Basin Trust and administered by Heritage BC, are helping to restore some of Fernie’s most significant and historic buildings. One of these is Knox United Church.

As one of Fernie’s six historic church buildings and one of only three which still operate as places of worship, Knox United Church is an important piece of Fernie’s heritage. The current church was built between 1909 and 1910 immediately after Fernie’s Great Fire of August 1908.

Built from locally made cream-coloured brick from the Fernie Brick Company in West Fernie, the church is a replica of the original wooden church that stood on this site. The only significant difference between the two structures is that the entrance door was moved from the bell tower to the gable end of the building, and the use of the fire-proof building materials.

Following a thorough Heritage Conservation Plan conducted by Ance Building Services in October 2018, several key areas of the church were identified as requiring attention. Possibly the most significant, and certainly the most visible, will be the restoration of the top of the bell tower. The congregation have chosen to restore the tower to its 1930’s appearance, when it featured a corbelled cornice, but no longer had the original crenellations. The cornice was removed prior to 1979 along with the front façade art glass windows, which were relocated to the rear wall of the building. The new cornice will be more sympathetic to the appearance of the building and provide additional protection for the brickwork, which is being damaged by poor drainage and the inappropriate finish of the current tower.

While some displacement can be seen on the front façade of the building, it appears that this is no longer an issue following the installation of structural tie rods in 1974. The majority of the work required on the bricks will be restoration of spalled surfaces and replacing the mortar with a traditional product. Previous repair work was carried out with a high cement content mortar and this has contributed to the cracking and water damage that can be seen on the exterior. Additional maintenance will be required to the damaged panes on the diamond-pattern windows and to the exterior woodwork, which shows signs of weather damage.

Have you recently demolished a structure made from Fernie brick, or have some stacked in your garden or yard? As the unique bricks are no longer available for purchase, the congregation is asking for the community’s help in sourcing any Fernie bricks that could be donated to the restoration effort.

Thankfully, the interior is in generally good repair. Renovations may include adjustments to the tri-level altar, which is impractical for many of the current performances, the church having more recently become a popular venue for choral events and dramatic theatre. Further renovations may include the heating system and accessibility to create a fully functional space that continues to meet the needs of the changing community.

Renovations at Knox United will no doubt be carefully observed by the congregation of Christ Church Anglican on 4th Avenue. While the CBT funding does not currently include restoration work for this location, the Church was able to secure funding to draft a Statement of Significance and Conservation Plan which clearly identifies the current state of the building and work that can be conducted in the future.

Learn more about these – and other – ongoing restoration projects and needs during ‘Open Doors’ on Saturday, September 21during Fernie Chautauqua.

In:
Art and Entertainment
Tags:
arts, Culture, history, Fernie BC